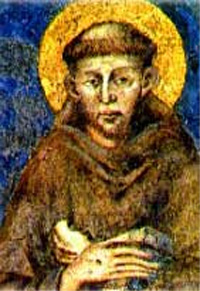 The principal apostolate of a lesser brother is to live a gospel life in truth, simplicity and joy. We should willingly assume any apostolic activity as long as it is in harmony with our form of life and responds to the needs of the Church. Aware of our minority, let us generously undertake those ministries that are regarded as especially difficult. Let the brothers show special care to those deprived of ordinary pastoral care because of the conditions of their life: the young, emigrants, laborers, those burdened by financial pressures, or those harassed by hostility or racial prejudice.
from the Capuchin Constitutions, Chapter 9

Inspired by God, St. Francis initiated a gospel form of life that he called a brotherhood according to the example of life of Christ and his disciples. We who profess this form of life truly constitute and Order of brothers. United by faith with god our Father and nourished at the table of the divine word and Eucharist, we love one another that the world may know we are disciples of Jesus Christ. …Wherever we may be gathered in the name Jesus, let us be of one heart and one mind, always striving to advance to greater perfection.
from the Capuchin Constitutions, Chapter 6

Three centuries after St. Francis, a number of Franciscan Friars wanted to live as the founder envisioned; they wanted to observe his original Rule and ideals. Devoting themselves to prayer, penance and preaching, the friars also heroically served the poor, sick and dying. In 1528 Pope Clement VII gave them permission to form a new community of Franciscan friars. They soon became known as the “Capuchins” because many Italian children called them cappuccini for the large hoods on their habits.

The year was 1927 when the first two Capuchins arrived in Blenheim, Ontario from Belgium. By 1933 a fraternity was established in Notre Dame de Toutes-Aides in Manitoba. The spread of roots continued! This time it was West again with a novitiate being established at St. Boniface, Manitoba in 1951. From there it was to Downsview, Ontario where St. Philip Neri Parish was entrusted to the Capuchins. The 1970s was truly and exciting time… in 1972 the Minor Seminary in Orangeville became a Retreat Centre for youth. Over 25,000 students and teachers were part of the legacy that included religious and outdoor education programs in community building, week long experiences. In 1980 our brother, Br. John Corriveau, OFM., Cap. was first elected to the General Definitory in Rome and in 1983 Br. Ignatius Feaver, OFM., Cap. was elected Provincial Minister, the first lay friar to hold the position of Major Superior in over 400 years!

Download a PowerPoint slideshow: Many Paths… One Journey. (Please note: This is a 7MB file and may take several minutes to download.)