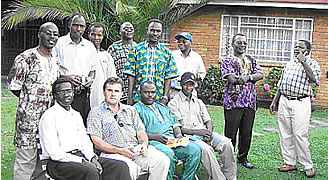 The Society of the Missionaries of Africa (White Fathers) was born in Algeria, founded in 1868 by Cardinal Charles Lavigerie, Archbishop of Algiers.

Their popular nickname of “White Fathers” comes from the Arab-style dress that they would keep while penetrating to the heart of the African continent.

Today there are 1405 Missionaries of Africa of 37 nationalities, 217 communities worldwide in 44 Countries.

Sent by God, the Father,
We “The Missionaries of Africa”,
Want to reveal his Love,
Deeply-rooted in Christ,
In small international and intercultural communities,
To the heart of the local Churches
as brothers or priests
In dialogue with
other cultures, and especially with the Africans,
other religions and particularly Islam
For the promotion of all humanity ,
We commit ourselves for and with the poor, as initiators
and agents of unity and reconciliation.
Commitment for Justice, Peace and the safeguard of the Creation.
We want to be bearers of hope
On the road of Liberation