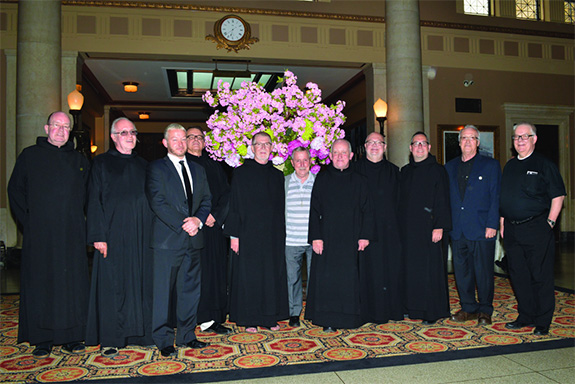 The Hospitaller Order of St. John of God is an Order of the Catholic Church. It draws its inspiration from the life, example and teaching of its founder – St. John of God. The basis of his life, example and teaching was a deep sense of hospitality which opened him to every person he met and moved him to do everything in his power to help them in their needs. The Order, endeavoring to maintain, deepen and perpetuate this hospitality towards others as an integral part of the life of God’s people, carries out a wide range of health and social service activities in 52 countries on 5 continents. The membership of the Order consists of 1099 Brothers who come from 51 countries. The Co-workers who partner the Brothers in their activities number approximately 40,000.

Strictly speaking, the Order is composed of men who belong to the religious family popularly known as the Brothers of St. John of God. However, the term ‘Order’ also is taken to indicate the persons and activities of the thousands of Co-workers, men and women, who, throughout the world, provide a wide range of health care and social welfare programs in centers and services that perpetuate the work for the poor, sick and needy commenced by St. John of God in the first half of the 16th century in Granada and southern Spain.

The fortunes of the religious family – the Brothers – have waxed and waned through the four and a half centuries of its life with periods of great expansion and other periods of retrenchment in the face of adverse social, political and ecclesial circumstances. Like many religious institutes today, the Order could be said to be in a period of ‘institutional’ waning. However Brothers and Co-workers are also actively developing a ‘new hospitality’ that responds to the new poor and the new needs of today. It is very evident that more persons are being assisted by the Order throughout the world today than ever before in its history.

On January 19, 2015 the General Council officially erected the Province of the Good Shepherd in North America. The new Province comprises the centers of the Little Brothers of the Good Shepherd in North America (United States, Canada and Haiti) which were incorporated into the Order on the same day, the houses of the Canadian General Delegation and the Center at Westville Grove which had previously belonged to the West Europe Province.

In this way we show that the compassionate and merciful Christ of the Gospel is still alive among men and we work with him for their salvation. When he called us to be Hospitaller Brothers of Saint John of God chose us to form a community of apostolic life, and so it is our desire to live out in communion with each other the love of God and our neighbor.

We feel that we are brothers of all mankind and we dedicate ourselves chiefly to the service of the weak and the sick: their needs and sufferings touch our hearts, and lead us to alleviate those needs and sufferings and to work for the personal development and advancement of such people.

As living members of the church, we seek to manifest the supremacy of God’s love and we wish to attain the perfection of love for God and our neighbor, through the unceasing exercise of all the virtues, the public profession of the vows of chastity, poverty, obedience and hospitality, fidelity to the spirit of the Rule of Saint Augustine, and observance of the Constitutions of the Order.