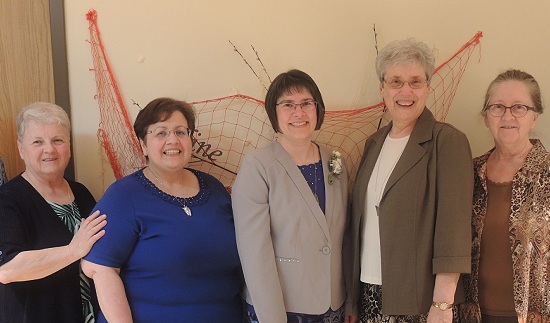 The Congregation of the Religieuses de Notre-Dame-du-Sacré-Coeur is an Acadian religious institute of pontifical right founded in 1924 in the province of New Brunswick by Mère Marie-Anne and 52 other sisters, all originating from the Sisters of Charity of the Immaculate Conception in Saint John, New Brunswick.

Since our foundation, our mission has been to serve the Acadian population, helping them to conserve their French language and culture, mainly through education, but also serving people in situations of poverty. We have had missions in New Brunswick, Nova Scotia, Prince Edward Island, Louisiana, Peru, Colombia and Japan. We presently serve in New Brunswick and in Haiti.

Having descended from the Congregation of the Sisters of Charity of the Immaculate Conception, we are greatly influenced by the spirituality of Saint Vincent de Paul, Saint Louise de Marillac and Saint Elizabeth Ann Seton who, depending on the needs of the times, took care of the destitute in a particular way. We, sisters of Notre-Dame-du-Sacré-Coeur, have as our charism, Charity, Simplicity and Risk in Faith.