Types of Vocations » Cloud of Witnesses » Prophets of Our Time

Prophets Of Our Time: Single For God

Two of the greatest prophets of recent times, Dorothy Day and Peter Maurin, founders of the Catholic Worker Movement were “single for God” and “singular” witnesses to their vocation. 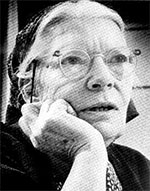 Dorothy Day, a convert to Catholicism was born in 1897 in Brooklyn New York. A journalist and Social Activist, Dorothy who in her young adult years flirted with Communism, lived a Bohemian lifestyle, was briefly married, had love affairs and lived with her partner Forster Battterham with whom she had a daughter, Tamar, eventually embraced a life of deep engaged faith. She experienced a gradual spiritual awakening, began attending Mass at a nearby Catholic Church and had her daughter baptized. She took the courageous step of leaving Batterham, a man she loved deeply, for the sake of a passionate response to God’s call. Dorothy herself became a Catholic in 1927. In 1932 Dorothy met Peter Maurin with whom she would found the Catholic Worker Movement.

The Catholic Worker Movement was the fruit of a, by-then single life, committed to God. The Movement began with the publication of the Catholic Worker, a newspaper first issued and sold in Union Square, New York priced at a penny a copy. It spread the word and work of Catholic Social Teaching. The Catholic Worker Movement that continues to this day was and is committed to the poor, those on the margins of society and to social justice in the face of war, violence and greed. It is grounded in the Gospel call of the Beatitudes and on a principle of respect for all persons, made in the Image of God. Dorothy’s “ultimately” single vocation, her transformation in the Sprit made all of this possible. In her lifetime she was called a saint, something she disliked enormously and yet holiness was something she believed all were called to. A woman of profound prayer, she said, “the Mass is the work”, she was also a woman of passionate action for God, for God’s people and world. An example to us all, Dorothy stands as a special witness to the holiness and potential of a single life, a vocation to true and uncompromising Gospel living in the world.

Born in 1877, one of 24 children, into a poor farming family in Sothern France, Peter Maurin spent a brief time discerning his vocation with the De La Salle Brothers. Realizing this vocation was not his call he immigrated to Canada where he tried his hand working the land in Saskatchewan. Following the accidental death of his work partner, Maurin eventually moved to New York City. For a period of 10 years he left the church saying simply “I was not living life as a Catholic should.” That was to change. Inspired by the life of St. Francis of Assisi Maurin embraced, with total commitment, Gospel simplicity of life and trust in God. After his meeting with Dorothy Day in 1932 he co-founded the Catholic Worker Movement being instrumental in encouraging the opening of the Movement’s houses of hospitality for the poor, simple farming communities of faith and gatherings to help people understand the treasures and call of Catholic Social Teaching for Justice. Like Dorothy Day, Maurin’s single life of faith created and sustained one of the great Gospel movements of his time and of today.

Jean Vanier, Canadian witness to a singular and single life of deep commitment to God and to some of the most beautiful and vulnerable people in our world. Born in 1928, Jean Vanier, son of the 19th. Governor General of Canada joined the Royal Navy and then the Royal Canadian Navy during World War 11. As a young man he studied in Paris where he obtained a Doctorate in Philosophy from the Institut Catholique de Paris. He then taught at the University of Toronto. Yet, like many of us, he was yet to discover the heart of his vocation.

In 1964 as a result of his friendship with a priest, Fr. Thomas Philippe, Jean became aware of the lonely situation of so many people institutionalized because of their living with developmental disabilities. Jean opened himself to their struggle and isolation. He allowed himself to be open to God through friendship and life’s experience. As a result he invited two young men, Raphael Simi and Philippe Seux, both with developmental disability to live with him in his home in Trosly-Breuil, France. Here they found respect, acceptance and love “in the ordinariness” of a home. As Jean Vanier has said, “we are not called by God to do extraordinary things, but to do ordinary things with extraordinary love” From Jean Vanier’s home in France was born the global movement of L’Arche where those with disabilities and friends who help them live together. In the L’Arche houses, however it is not a matter of helpers and those who are helped. There exists in these ordinary, sacred spaces of living the recognition that we are all gift to one another through our “specialness”. Jean Vanier makes this clear when in his book, Becoming Human, he says: “Every child, every person needs to know that they are a source of joy: every child, every person needs to be celebrated. Only when all our weaknesses are accepted as part of our humanity can our negative, broken self-image be transformed.” Jean Vanier continues today, with all those who have followed him, to be an inspiration for the L’Arche movement and beyond – working for God in the ordinary! Jean was inspired to follow his single vocation through a “happenstance” in his life. Has something happened in your life that seems to be inviting, calling you to “the more”?