Women Of God’s Love And Justice

Meet some women who in recent times have shown us the fidelity, love, joy, commitment, and sacrifice for others that characterize the life of a Sister. Let them inspire you, encourage and invite you to be all that a woman can be by their example of living life fully for God and God’s people. 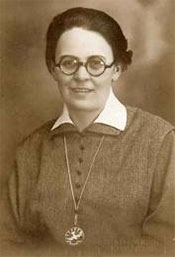 Here’s a very special woman you may not have met before! Sister Sara was born in Hungary in 1899. A member of the Sisters of Social Service, Sara was a gifted teacher, journalist and cultural activist. Towards the end of the Second World War Sister Sara, moved by deep compassion, a sense of justice and remarkable courage hid hundreds of Jewish people in one of her community’s convents. For this love, integrity and bravery Sister Sara was reported to the authorities. The then ruling fascist Arrow Cross Party drove Sister Sara and the people she was protecting to the banks of the Danube River. She was shot and killed on December 22, 1944. During the War the Sisters of Social Service, then a small community whose special devotion is to the Holy Spirit and whose commitment is to the living out of the Social Teachings of the Church for all, saved more than a 1000 lives. Sister Sara was beatified in Budapest in September 2006, a witness to great love and like all of her Sisters in community, a woman of justice for all. To read more about Sister Sara see www.salkahazisara.com/bio_en.html. Be inspired by her example and that of the Sisters of Social Service whose work continues today!

Mother Theresa: (Missionaries of Charity) A Sister and Mother to the poorest of the poor

And here’s a woman of faith known and loved the world over. Mother Teresa was born in Albania in 1910. She summed up her own life with some special words that speak to the vocation of all religious sisters: “By faith I am a Catholic nun. As to my calling I belong to the world. As to my heart, I belong entirely to the Heart of Jesus.” After founding the Missionaries of Charity in 1950, Mother Teresa lived her whole life following in the footsteps of Jesus reaching out to the poor, the sick and the dying. She began that work in India and by the time of her death in 1997, her community had 4500 sisters ministering in 133 countries caring for those with HIV/AIDS, Leprosy and Tuberculosis. Today they are to be found in soup kitchens, hospices, schools and working as counselors the world over. In 1979 Mother Teresa was awarded the Nobel Prize for peace. She said: “The fruit of faith is love and the fruit of love is service”. Sometimes when we look at the life of Mother Teresa it seems that she was always clear about her faith and calling. But like us, Mother Teresa had her struggles. She made a hard decision regarding her vocation, discerning to leave her original community, the Loretto Sisters, in order to respond to what she truly believed was God’s personal call to her. It wasn’t an easy decision – she always loved her first religious community – but with courage she made her choice for God in her particular life and time. After her death her letters also show that this great woman of faith struggled sometimes with faith. In this she shows us that real holiness is about choosing God even in our struggles and moments of doubt. Living religious life involves a continuing journey of faith that from it love and service will be born. What is born in my heart as I look at this life of this ordinary yet remarkable woman? 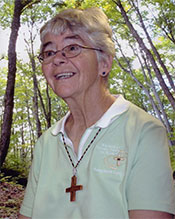 Sister Dorothy Stang, born in the U.S.A in 1931, was a Sister who grew in her sense of Christian and religious vocation as she embraced the ever widening understanding of love of neighbour. Like many religious Sisters today she committed herself in her ministry to address the integral relationship between destruction of the environment and the poverty of God’s peoples. For many years Sister Dorothy or “Dot” as she was known to her family, friends and the people with whom she worked ministered in Brazil eventually claiming Brazilian citizenship. She lived a life of deep personal simplicity and sacrifice identifying with the poor with whom she was privileged to live. Sister Dorothy labored long and hard in her efforts to claim the land rights of peoples living in the Amazon rain forest and for the preservation of the environment. She was often photographed in a T-shirt on which was written in Portuguese, “A morte da floresta é o fim da nossa vida” meaning in English, “The death of the forest is the end of our life.” Her ministry brought her the anger of the loggers and big land owners and her life was threatened. Despite this she remained steadfast and faithful to the people. “I do not want to flee”, she said, “nor do I want to abandon the battle of these farmers who live without protection in the forest. They have a sacrosanct right to aspire to a better life on land where they can live and work with dignity while respecting the environment.”

Very early on the morning of February 12, 2005, Sister Dorothy set out for a meeting with villagers. She was stopped en-route by two men known to her, Clodoaldo and Raifan. They asked her if she carried a weapon in her bag. She responded “No” only a Bible. Removing the Bible from her bag she read to the two men a verse from the Beatitudes, “Blessed are the poor in spirit”. As she moved a few steps onward Clodoaldo gave Raifran the order to shoot and he did so, shooting her first in the stomach, then in her back and finally he shot 4 rounds into her head. A woman of the Gospel, Sister Dorothy lived her thoroughly modern ministry in light of the Beatitudes proclaimed by Jesus. She died for the people and for the land. The scene was witnessed and eventually her killers were brought to justice. As we look at the witness of Sister Dorothy each of us might ask, “To what do the Beatitudes call me in my life”? Could I be called to a religious community whose ministry invites me to serve the poor and to care for the Earth, the gift of God to be shared by all? To learn more about Sister Dorothy, the people and work she has inspired go to: www.dorothystang.org