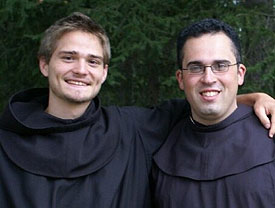 In 1209, St. Francis of Assisi received approval from Pope Innocent III to “live the Gospel of Jesus Christ in fraternity.” For 800 years, the Franciscans have continued to strive to live out that call. The Province of the Immaculate Conception began in 1855 when Friar Panfilo da Magliano came from Italy to minister to Catholics in Upstate New York. He founded St. Bonaventure University, two Provinces and groups of women religious, and his brothers spread throughout New York and New England, Toronto, Canada, and Central America to spread the Good News.

Today, the Immaculate Conception Province ministers in New York, New England, Toronto, Canada and parts of Ohio, Pennsylvania, West Virginia and Florida administering parishes, schools, retreat centers, reaching out to the poor, and anywhere that God leads us. We also are active in missionary activity with our mission locations in El Salvador, Honduras and Guatemala.

Perhaps God is calling you to join us?