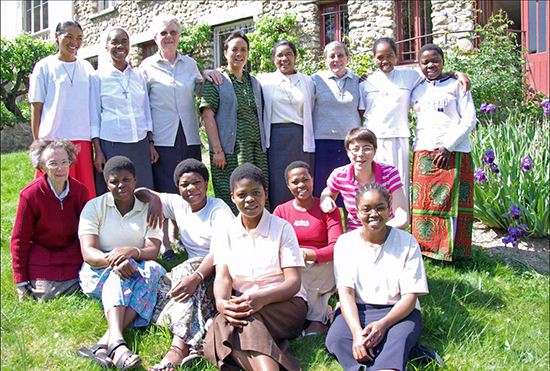 The Congregation of the Daughters of Wisdom was founded in 1703, in Poitiers, France, under the reign of Louis XIV. At that time, the rich were living a life of luxury while poor, beggars, mental patients, disabled, prostitutes, drunkards, pickpockets and robbers were starving in the streets. To keep order in the cities, these “poor itinerants” were picked up by force and hoarded in homes called “Hospitals”. These institutions were practically houses for the destitute. Diseases, disorder and vice reigned.

PURPOSE of the foundation of the Daughters of Wisdom:

INNER ULTIMATE GOAL – total transformation in Jesus
EXTERIOR GOAL: Education in charitable schools (for handicapped, for hearing and vision impaired), care of the sick in Clinics or Hospitals, care of the soul in Retreat houses, Social works.

He was Louis Marie Grignion and later, dropped his family name of Grignion because it represented the upper class and he wanted to identify with the poor. He therefore took the name of Montfort the village where he was baptized. The people simply called him “the Good Father of Montfort”. He was

He is a universally known author of treaties on spirituality: Love of Eternal Wisdom, True Devotion to Mary, Letter to the Friends of the Cross, The Secret of Mary…etc.

He also founded the Montfort Missionaries for Evangelization and the Brothers of St. Gabriel for the Education of poor children

The 3 Congregations are the Montfort Family, along with Associates or Friends. The Montfort family shares in the same charism.

FIRST DAUGHTER OF WISDOM AND CO-FOUNDRESS: Blessed Sister Marie-Louise Trichet, also known under her religious name Sr. Marie Louise of Jesus. At the invitation of Montfort, she abandoned her higher social status to serve Jesus in the poor by living with the destitute in the Hospital of Poitiers.

NEW TYPE OF COMMUNITY: At that time, almost all religious Sisters were cloistered, living in a monastery. With St. Louis Marie and Sr. Marie-Louise a new type of community was initiated, a community among the people and at the service of the poor and the neglected in society.

This was the reason why Montfort called them “Daughters” and not “Sisters”. Also, Montfort gave as distinct habit to his followers in this new Congregation, the usual garb of the poor peasants of France. They dressed in a thick grey coarse homespun woolen dress. Montfort added a crucifix and a rosary to distinguish his Congregation with the dress of the peasants.

The Daughters of Wisdom are in 21 countries on all continents. Formation is done in three International Novitiates with a choice of three languages: English, French and Spanish. In Canada, the Sisters arrived in 1884…with presence in Ontario, Quebec, Alberta and New Brunswick.

She is the way God chose to come to us, and the way we should take to go to Him.

3-The poor:
Those that society, Church and the world reject or neglect…hence the works of mercy of the Daughters of Wisdom