Types of Vocations » Cloud of Witnesses » A World Of Witnesses To Love: Married “Saints” Ancient And Modern

A World Of Witnesses To Love: Married “Saints” Ancient And Modern

“The Creator made the married state the beginning and foundation of human society; by his grace he has made of it, too, a great mystery in Christ and in the church, and so the apostolate of married persons and of families has a special importance for both church and civil society.” (The Documents of the Second Vatican Council: “The Laity” # 11)

Although we are not always aware of them there are numerous saints and “blesseds”, ancient and modern”, who lived their life for God in the world through their married love and family life. Meet some of them here! 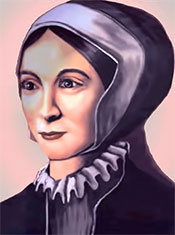 An English saint born in 1556. In 1571 Margaret happily married John Clitherow, a butcher in the City of York. Of John she said, “I love him next to God in this world.” Margaret was just 15 when she married (hard for many of us to imagine today!) Margaret and John had 3 children together, Henry (who became a priest), Anne and William. When she was 18, Margaret converted to Roman Catholicism in very difficult days for the faith. Her husband, John remained a Protestant but gave her his full and loving support on her spiritual journey. Despite threats of imprisonment and even of torture and death, clandestine Masses were often held in their home. A hole was cut between their attic and that of the neighbouring house to enable a priest to escape in the event of a raid. In 1586 Margaret was captured and brought before the courts for the then crime of hiding priests. As a loving mother she refused to plead her case so as to prevent a trial that would involve her children being made to testify through torture. Following in the footsteps of Jesus, Margaret was executed by being crushed to death on Good Friday, 1586. She was just 33 years-old. Canonized in 1970, Margaret is the international patroness of the Catholic Women’s League. Perhaps Margaret Clitherow invites us each to question: “For what and whom do I live and for what would I be prepared to die?”

Blessed Luigi and Maria Beltrame Quattrocchi: “Together in Love” 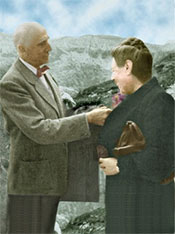 Luigi and Maria Beltrame Quattrochi were the first married couple to be beatified together. Theirs was a remarkable love for one another, for their children and for the world. Even before meeting, Maria and Luigi were deeply committed to the expression of their Christian faith through social activism. After university studies, Luigi became a lawyer and Maria, a university professor and a public speaker in the field of education with a special interest in music and art. Both were clearly convinced that marriage is a vocation.

Their family home in Rome was a place of deep warmth, hospitality, deepening faith, charity and social activism. Together, Luigi and Maria had 4 children. Maria’s final pregnancy was life-threatening and doctors attempted to pressure her to have an abortion. She refused. With Luigi, Maria held a vigil of prayer dedicating their child to God. Both mother and daughter, Enrichetta, survived.

The family was lively and deeply happy. They surrounded themselves with friends whom they invited to share camping and hiking holidays with them. During the Second World War the family home became a place of safety for refugees, displaced people and others in need. Deeply prayerful, Luigi and Maria invited their guests to join them in the family’s regular prayers together. Committed to the faith, they conducted catechism classes for children, adult faith development initiatives, marriage preparation sessions and retreats. Following the Second World War both contributed to the reconstruction of Italy. Luigi became the Deputy Attorney General for Italy and Maria helped found the Sacred Heart Catholic University in Rome. Luigi died at home in 1951 and Maria in 1965 at the age of 81 in the arms of the daughter she had refused to abort. Maria and Luigi witness for us deep trust in God and the living of “life abundant”.

For further information on married “saints” a very good read is: Ferdinand Holböck. “Married Saints and Blesseds: Through the Centuries”, Ignatius Press, 2002