In your personal experience you may know some remarkable Diocesan Priests whose lives of dedication, prayer, service and love have deeply touched your life and the lives of those in their local churches and communities. Below, are some well- known witnesses to the fullness, the joy and the commitment to the vocation of the diocesan priesthood.

St. Jean-Baptiste Vianney, the Curé of Ars was born in 1786 near Lyons in France. His road to priesthood was in some ways a struggle as he had little formal education and he found the demands of his seminary preparation very hard. Yet, those who accompanied him during his initial priestly formation remained convinced of his vocation to the priesthood. He was first and foremost a man of deep humility, compassion and gentleness absolutely committed to God and to those he served. Ordained in 1815 he was assigned by his bishop to a small parish in the village of Ars near Lyons. His immense gifts as a parish priest soon shone out. He lived a personally holy and simple life of commitment. Most significant were his gentle skills, common sense and penetrating insight that enabled him to “see into peoples’ souls”. Through his work of spiritual direction, accomplished through daily reflections and through the Sacrament of Reconciliation, he reached thousands of people guiding them to God, calling them to joyfully live out their Christian vocations in the world. Some 20,000 people came to him for spiritual guidance each year. Always St. Jean Vianney would give of himself from his deep source of relationship with God in prayer. In one of his sermons he reminded his listeners that “we can only find our happiness in loving God … and we can only love God in prayer.” What great advice to all of us down the centuries and perhaps through his remarkable witness, the humble parish priest, St. Jean Vianney, still calls men to reflect on the vocation of the Diocesan priest – a life of joy a deep service. 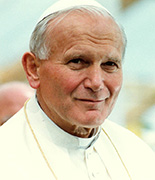 Pope John Paul 11 was born Karol Józef Wojty?a in Wadowice, Poland. His time as Pope and his gifts in global leadership are well known throughout the world but perhaps the most significant feature of his life was his absolute dedication to the gift of his priesthood. Although when he was discerning his vocation he was first attracted to life as a Carmelite priest, John Paul eventually realized that his special call from God was to the diocesan priesthood. After studies and formation at the seminary in Kraków, he was ordained on the Feast of All Saints in 1946. His first pastoral assignment was to a small Polish parish in the village of Niegowi?. When he arrived in the village he immediately knelt to kiss the ground, his “trademark ritual” during all his later visits across the globe. There is something about the ritual, however, that goes deeper than the act itself symbolizing his passionate commitment to his faithful service as a priest. Whether as a parish priest, a university chaplain, bishop or pope it was this profound commitment to God that stands out in his life. Through his life and writings John Paul consistently set an example for other priests, encouraged vocations to the priesthood, called men to the sort of commitment, holiness and generosity that he exemplified in his life. On Holy Thursday, 1979, Pope John Paul wrote the following to priests: “The only priest who will always prove necessary to people is the priest who is conscious of the meaning of his priesthood:

The Priest
who believes profoundly,
who professes his faith with courage,
who prays fervently,
who teaches with great conviction,
who serves with zeal,
who puts into practice in his own life
the programme of the Beatitudes,
who knows how to love disinterestedly,
who is close to everyone, and especially
to those who are most in need.

Pope John Paul’s words surely describe his own life as a priest. Might they also describe YOU? 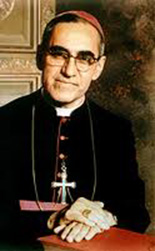 A great and dedicated priest, Óscar Romero walked a journey of growing consciousness and personal conversion just as each of us is invited to do. Born in El Savador, Romero lived his childhood in poor circumstances. He was ordained to the priesthood in 1942 in Rome where he had been sent by his bishop to study. Returning to El Salvador, Romero fitted in quite easily to a Church that tended to acquiesce to the rich and powerful of the country – a country of deep oppression and increasing violence. Nonetheless Romero was a good priest, faithful to his call. He was a quiet, conservative and bookish man and so it came as a great disappointment to many when he became Archbishop of San Salvador in 1970. It was thought that he would maintain the status quo in Church/State relationships. But Romero’s personal and deep spirituality and commitment to Christ as a priest prepared his heart to be converted into ever deeper relationship with God and his people. When he stood by the body of his friend, Jesuit priest Rutilio Grande, who had been murdered for his work for the liberation and empowerment of the poor, Romero said: “When I looked at Rutilio there dead, I thought, if they have killed him for doing what he did, then I to have to walk the same path.” And Romero did indeed walk the same path. Increasingly conscious of the oppression of the people and of the terrible violence of the ruling classes through the action of the army, Romero called on soldiers to obey the higher orders of God, he called on government to act for the poor and he recounted abroad the horrors endured by his people. Romero’s priesthood became service to the voice of the poor and suffering. On March 24, 1980 while celebrating Mass in a small hospital chapel, Romero was assassinated, his blood mingling with the Blood of Christ and with that of his people. Just a few days before his death Romero knowing his life was at risk had told a journalist: “A bishop will die but the Church of God which is the people will never perish.” To see the power and promise of Romero’s life and priesthood take a look at the movie, “Romero”. It will touch you “deeply” and perhaps it will call your heart too!