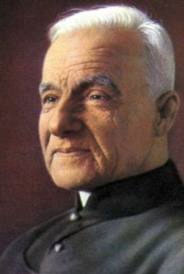 Brother André Bessette, Canada’s own saint, grew up in a struggling Quebec family and he was orphaned at a young age. As a young man he tried his hand at working in the United States but on his return to Canada he applied to join the Congregation of the Holy Cross. Initially the superiors of the Congregation rejected his application because of his poor health but in 1872 with help from his local bishop, he was accepted and with joy professed his religious vows in February 1874. Brother André was a simple and not highly educated man. He was assigned by his community to be the porter or doorkeeper at Notre Dame College in Côte-des-Neiges, Quebec. Here he was known for his great kindness and humility to all who lived, studied and visited there. He also had a good sense of humour. He remarked, “When I joined the Community the superior showed me the door and I remained 40 years!” Day in and day out, Brother André lived this ordinary life. Yet he profoundly touched the lives of vast numbers of people reminding them of God’s great love and becoming a healer of the sick as Jesus was. Many miracles of healing occurred and millions of people sought out Brother André’s help. With the support of his Congregation and many donations the famous Saint Joseph’s Oratory was built where Brother André received those seeking God’s help and where to this day people seek the healing intercession of Brother André. He died in 1937 and a million people attended the funeral of this very simple man. Brother André was canonized by Pope Benedict in 2010. Brother André inspires us in many ways. He reminds us that God is to be found in the ordinary. His attitudes tell us that entering religious life is a joyful move – Brother André was a man of great humour. His conviction concerning his religious vocation teaches us something of perseverance and complete love of and trust in God. His whole life reminds us that religious life is all about sharing the love and healing of God in all situations. Could you be called like Brother André?

Conclusion of the prayer to Brother André: “We ask to be made a part of God’s work alongside you in the spirit of prayer, compassion and humility. Amen”